Ginevra de’ Benci was the first of four female portraits universally attributed to Leonardo da Vinci. Here are the artist’s “other women.”

Portrait of a Lady with Ermine 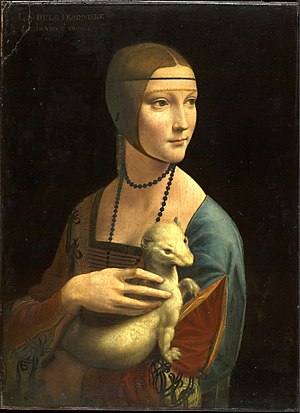 This lady is believed to be Cecilia Gallerani, a leading literati in Milan. She was also mistress to the ruling duke, Ludovico Sforza, known as il Moro. A poet, musician, and singer, Cecilia reportedly hosted gatherings of philosophers and perhaps invited Leonardo to their discussions when he served the duke. She was about sixteen years old when the portrait was painted. Cecilia bore Sforza a son, and eventually was forced out of the castle when he married Beatrice d’Este. Cecilia then married Count Ludovico Carminati de' Brambilla and had four more children.

Like the juniper bush behind Ginevra, the ermine in Cecilia’s arms carries many meanings and perhaps is a pun on her name since the ancient Greek name for ermine is galee. Legend held that ermines would rather die than soil the pure white color of their winter coat, so the animal became a symbol of purity. Aristocrats often kept ermines as pets, so perhaps Cecilia did as well. The ermine certainly identified the patron of the portrait—Ludovico had been admitted to the Order of the Ermine, a chivalric fraternity, in 1488. 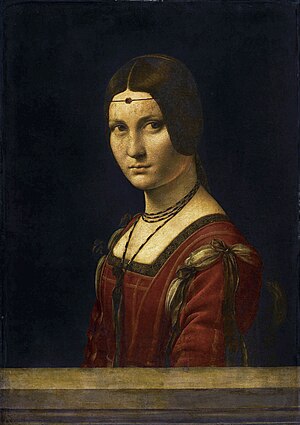 This portrait earns its descriptive name from the ornamental band around the sitter’s forehead. She is believed to be Lucrezia Crivelli (1452- 1508) another mistress of Ludovico Sforza, and the mother of his son, Giovani. Crivelli had been a lady-in-waiting to Sforza's wife, Beatrice d'Este. Ironically, after Beatrice died, Crivelli lived for many years in Mantua under the protection of Beatrice’s older sister, Isabella. Tests show that this portrait and Lady with an Ermine were painted on wood panels cut from the same tree trunk. Some scholars speculate that this portrait might actually be Beatrice d’Este rather than Crivelli.

Recently a painted version of the drawing was discovered in a Swiss bank fault. Scholars are debating if Leonardo did it as well.

Isabella d’Este (1474-1539) was the eldest daughter of the rulers of Ferrara, Ercole I and Eleanor of Aragon, generous patrons of the arts. Isabella carried on that tradition when she married and ruled Mantua. Educated in Greek and Latin, an accomplished lutist and dancer, Isabella presided over gatherings of artists and scholars, filling the castle library with books. Noble women throughout Italy emulated her way of dressing. She also mixed her own fragrances. But Isabella’s greatest artistic love was music. She nurtured secular composers and employed female singers at her court.

When her husband was captured and held hostage in Venice, Isabella led Mantua's military forces, defended the kingdom against invasion, and rode to Milan to negotiate with the king of France. Evidently her husband was humiliated by her political acumen and ability to negotiate his release. Isabella responded to his rage by traveling and living independently, mostly in Rome, where she met and encouraged many artists. She gave birth to eight children, and helped build Mantua into a Duchy during a time Italy’s many city-states fought one another for power and territory. In addition to Leonardo’s drawing, Titian also painted ca portrait of herHer portrait was painted by Titian and drawn by Leonardo. (see Leonardo’s other women.)

For more on Isabella see: http://italianrenaissanceresources.com/units/unit-8/essays/isabella-deste-collects/

This chalk and ink drawing of a young fiancée in Milan may have been done by Leonardo in 1496. Historians now think she is Bianca, the illegitimate daughter of Ludovico Sforza, the duke of Milan who employed Leonardo for many years. Her father commissioned the painting for Bianca’s upcoming wedding to a commander of the Milanese army, when she was 13 years old.

The most recognized painting in the world (the second being Van Gogh’s Starry Night) Leonardo started this painting in 1503, while still in Florence. This portrait is thought to be of Lisa Gherardini, the wife of a Florentine cloth merchant named Francesco del Giocondo. But Leonardo took it with him to France, rather than giving it to her family. No one knows exactly how long he took to paint it, or for what occasion (or reason) he painted it. Much of the Mona Lisa’s fame comes from the way her eyes seem to follow the viewer no matter where he or she stands. Her enigmatic smile has also intrigued us for centuries. According to the Louvre, where the portrait hangs, her smile is as much an identifying emblem as the juniper bush, or ginepro, is in Ginevra de’ Benci. In later Latin, the word gioconda, suggests pleasant, delightful, happy.