To All The Dogs I've Loved Before

“Because of the dog's joyfulness, our own is increased. It is no small gift.” - Poet Mary Oliver

I’ve been lucky.  Animal friends have always filled my life—cats, turtles, ponies, horses, baby cottontail rabbits and squirrels abandoned by their parents and nursed to health, released again into the wild while singing jubilantly, “Born free, as free as the wind blows”—and dogs, always dogs. Their playfulness, their unabashed affection, their wondrously spontaneous delight at whatever smells the breeze has brought them, and their glad flop in a sunbeam to sleep—these things have made me laugh, made me pause and drink in the air myself, and given me such solace on hard days.  They’ve touched my heart and kick-started my imagination—as is the case with my new book, STORM DOG.

So in honor of all the dog characters in my latest book, I thought I’d tell you a little about the dogs I've loved—since often our best stories are about our pets! 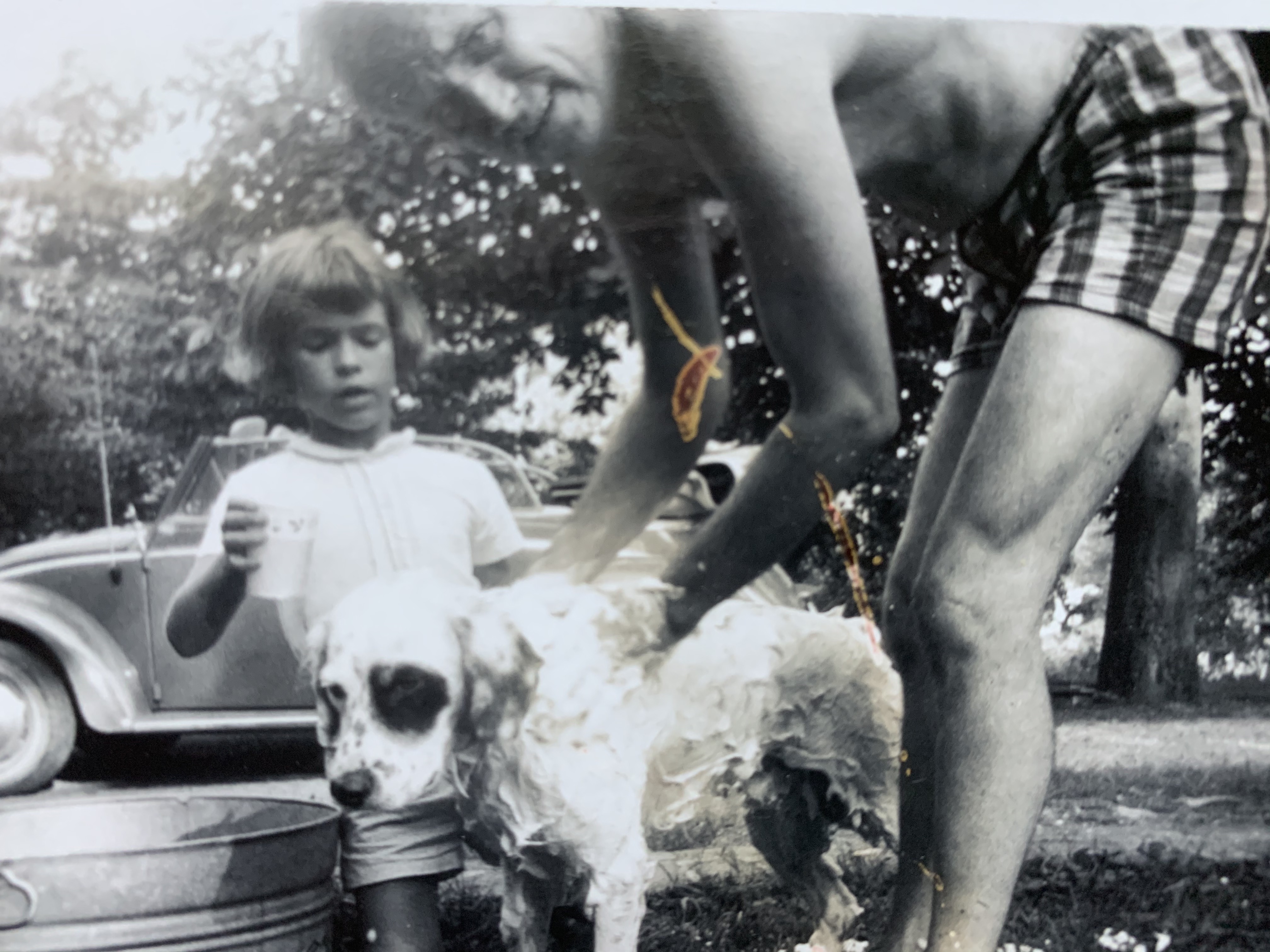 My family took in our first rescue when I was about five years old. Pat was my playmate, my fearless scout in the games I played in the woods behind our house. Growing up on what once had been my grandfather’s dairy farm, not far from where Ariel’s narrative takes place, I spent as much time as I could picking wildflowers in the fields, climbing trees, and exploring the creek in the back acres. Pat went with me.  Like many English setters, he was a bit of a wild-child, a roamer by nature—setters just have to follow their noses, they can’t help it—but once emotionally attached, no matter what bird he flushed from the grasses or toad he discovered in the mud, Pat kept me in sight. He was incredibly protective of me, and sort of, kinda tolerant of baths.

Speaking of protective—our next dog, Heather, was my Daddy’s comrade-in-arms during my teenage years. I’m distressed that I can’t find a photograph of her—she was a beautiful setter-lab mix and looked a bit like a Gordon if you know the breed. She was completely my father’s dog. She adored him and seemed to always anticipate his next action or truly to read his thoughts. When I arrived home from the few dates I had during high school, my father would flip on the front porch light—a beacon bright enough for a lighthouse on a craggy shore—and let Heather out. She would rush with such ferocity to the driver’s side of the car I was never accompanied up those steps for a good bye!  I swear she grinned as she trotted back inside to be greeted with a conspiratorial “good girl” from Daddy. My next dog, Tory, is the only one who has not been a rescue—but I felt like I was saving her from her litter of Llewellins. That’s because while her siblings rushed the gate to greet me in wonderful slobbery snuffs, Tory stood in their water bowl, shivering all over. It has to be said, she was not the smartest of my dogs. But sweet and extremely trusting. After college I was living in a whimsically tiny and ramshackle place in Old Town Alexandria, where thunderstorms roll up the Potomac Rover with sudden, roof-rattling cacophony. Ever read that marvelous Because of Winn Dixie? Remember what happened with her during storms? Tory was a total Houdini. She could slide herself into the smallest of spaces to hide from thunder. There was one time—I’m not kidding—I found her squashed in a cabinet and the only way I tracked and found her was by following the jingle of her tags.  I swear she had closed the door behind her. I’m also convinced there were Tinkerbell fairies living in with us, as Tory constantly froze, ears up, on point, staring at the wall. She went to “Camp Granddaddy” when my daughter was born and immediately fell in love with his acres and with him, completely and utterly. So she lived out the rest of her life there and kissed my daughter gently when we visited. Our next setter was sweet old Georgia. We’re lucky to have several acres fenced so she could run and hunt and cavort to her heart’s delight. I’ve tended to take older rescues, knowing it’s harder for them to find homes sometimes, but the heartache of their passing can come all too soon, especially when their age is a guestimate. Georgia was a runaway, found half starved in the mountains. She was THE most child-friendly and loving dog I have ever known.  (Which is a hallmark of female English setters—they LOVE their people, especially when kindness finds them after years of harsh treatment or circumstances.) Georgia didn’t mind being a clue in a treasure hunt for my daughter or my son perfecting his own walk as a chortling toddler by hanging onto her back to steady himself. She might roll her eyes at me, but she patiently stood as he pulled himself up.  She left us all too soon. 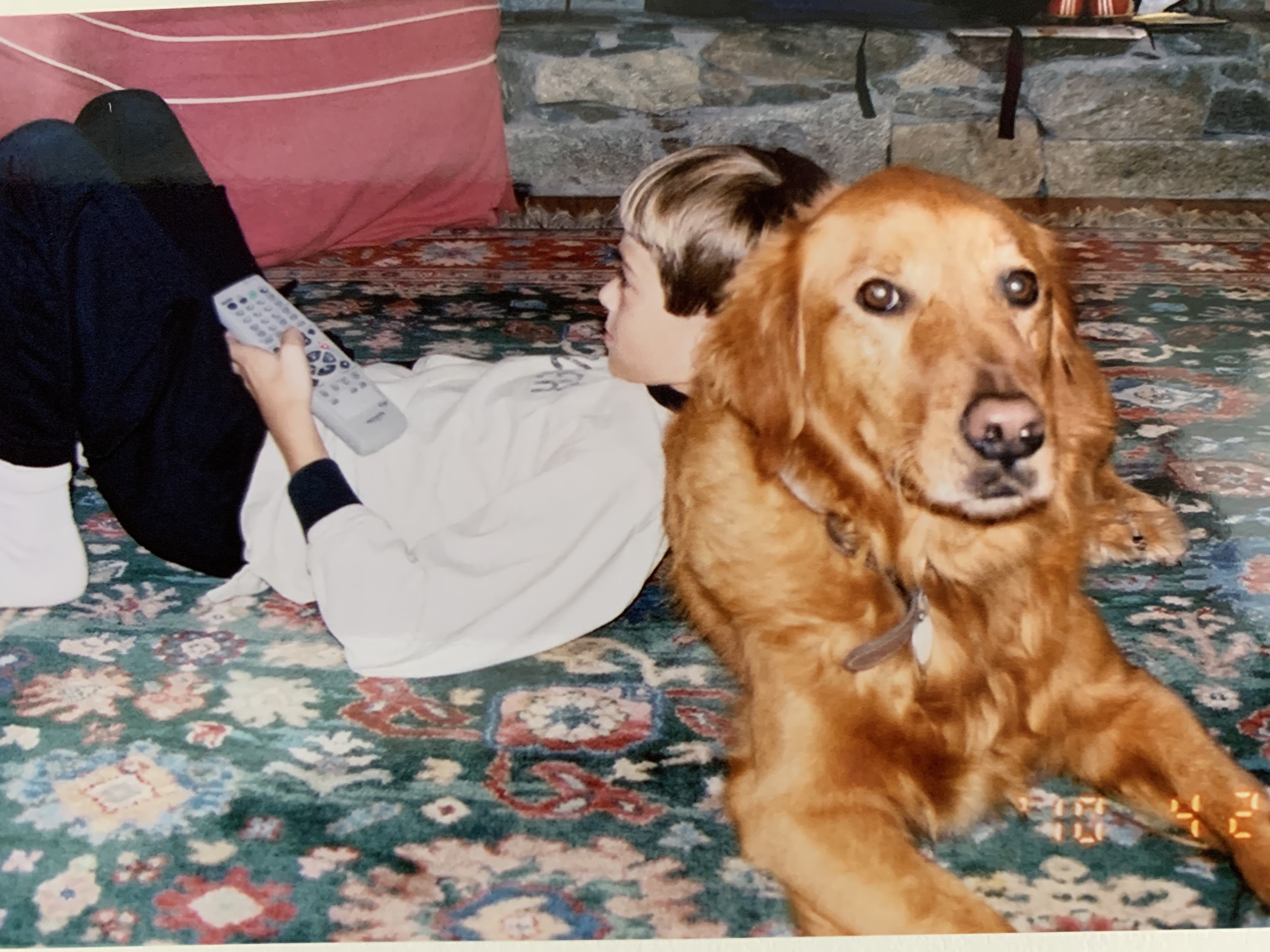 Spot—take her name as a great telling reveal of my father’s droll sense of humor (naming a golden retriever “Spot”). She came to us after we lost him to cancer, and if I ever doubted that a dog’s heart could break I never will again having witnessed her howl as medics arrived one sleety January day to take my Daddy on his last voyage to hospice. Afterward, Spot’s soulful eyes never lost a lingering sadness, but she provided such comfort as a kind of surrogate for my children of their grandfather. My son picked out Raven from a shelter when she bounded up to several cats lounging in the lobby and gave them each a happy lick, prompting their resonate purrs. She had the BIGGEST tongue I’ve ever seen on a dog. And it was totally indicative of how loving and affectionate she was.  Her kisses were face-swiping! Given up by a breeder—the jerk—after she’d blessed him many litters of what I am sure were beautiful puppies to sell. My son and Raven adored one another at first sight. After we got her home, we discovered she was prone to violent seizures, even after the vet prescribed medication. We’d just hold her until they were over, and then she’d look up with those big brown eyes with a “goodness, what was that all about?” expression and give us one of those heartfelt licks. You’ll find a fond homage to her in STORM DOG’s character, Midnight. When I speak to schools, students invariably ask me who is my favorite character in the books I’ve written. (I can’t answer that! I love and care about ALL of them). But if you pushed me to name my favorite dog I would probably answer sweet Faye.  Even though she was one of the prettiest setters I’ve ever had, there was nothing prissy about Miss Faye. As elegant as she was in appearance, she ripped the downspout off my house several times trying to get to a chipmunk that had fled up it. She too was older. Another rescue—I was her third or fourth person, the group wasn’t sure which—and she was already going deaf when I got her. She also—bless her—had crossed eyes, which meant even when she was “talking to me”—which she did often in soft growly conversation—she was looking off to my left... or to my right. . . or sometimes I’m not sure which direction.  She was my constant companion, loving to go to the beach and watch the birds at sunset. As I wrote STORM DOG, she stayed right by me under my desk, reminding me of all that is loyal and steadfast in a dog’s good and enormous heart. 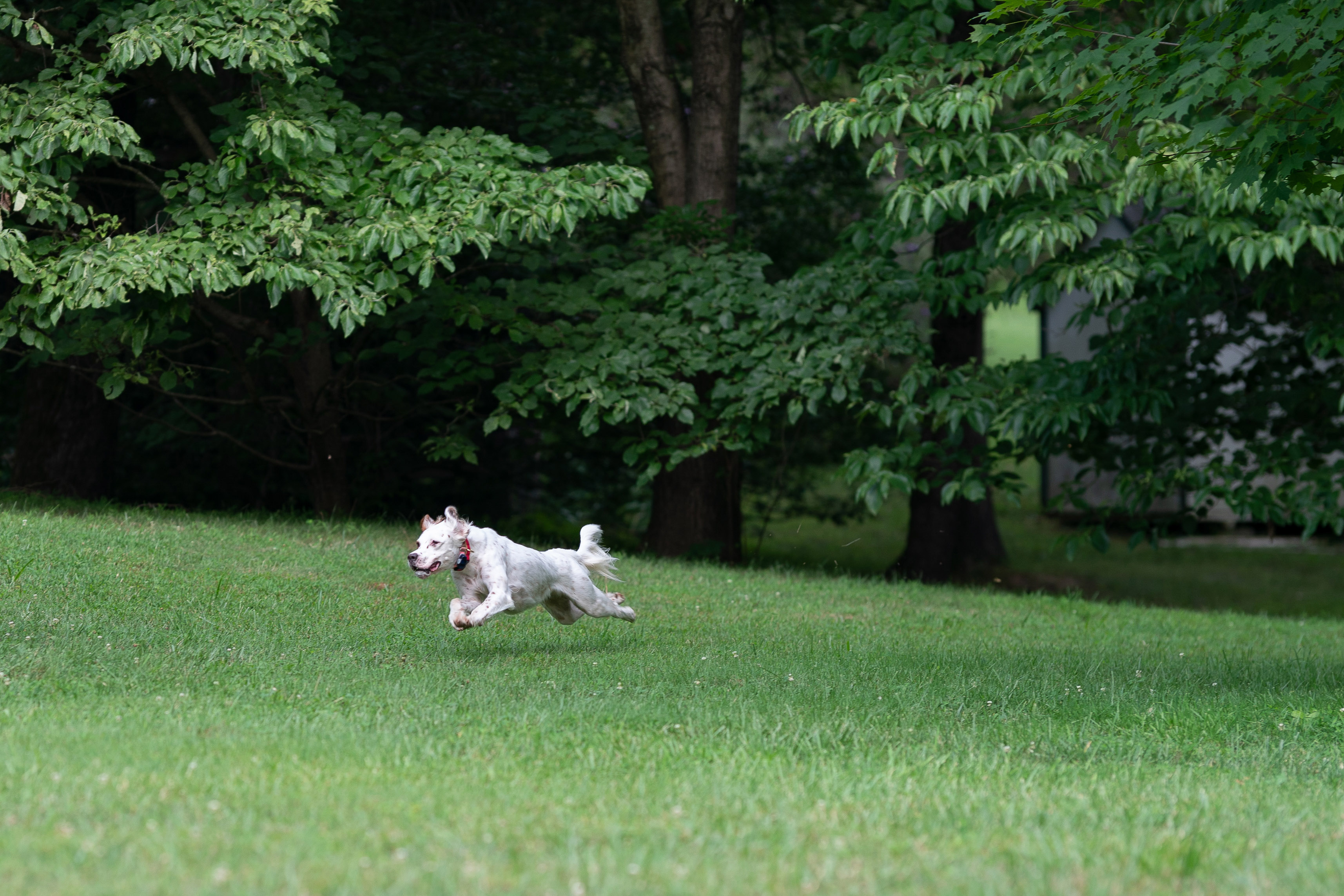 My latest friend is Gracie—a true racehorse setter. See her running with all feet off the ground?—she can do that ALL day long! She’s a youngster, only three-years-old, and the rescue organization told me I was her fourth person before she’d turned two, poor thing.  She’s a big-personality and needs lots and lots of running space and time—but once she’s inside, she’s flops at my feet and watches me carefully for cues. She is smart, smart, smart, and I hope she’ll be cavorting around my yard for many years.

The personalities of all these dogs--and the many others I have met and delighted in over the years--definitely inspired me while writing STORM DOG. I hope you will read my latest project, and have some laughs of recognition in my supporting cast of canines!